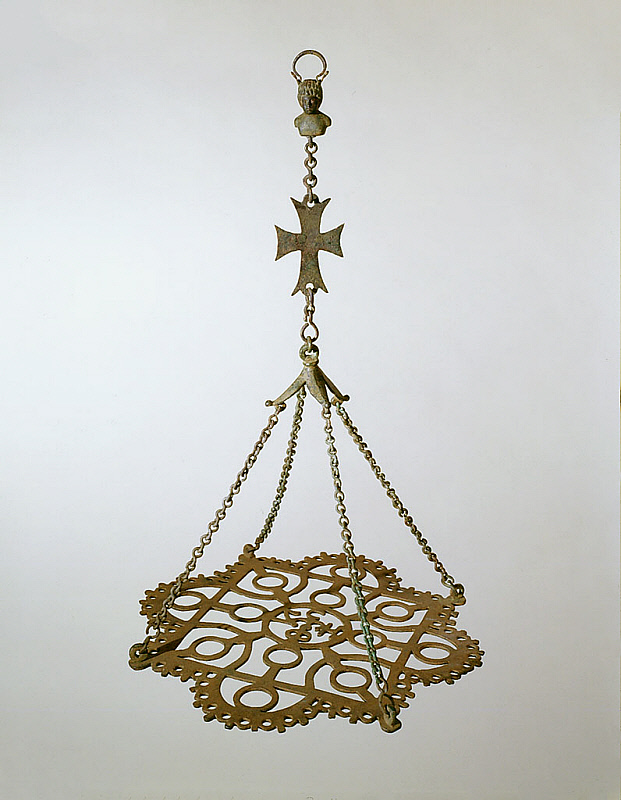 This polycandelon, a device used to hold multiple lamps, has a base in the shape of a square platform with four protruding semicircles. A decorative border encloses the resulting quatrefoil. Twelve round openings in the base originally held glass vessels filled with lantern oil. In the center of the square, a monogram in the form of a cross reads “LIGHT/LIFE” in Greek, an inscription frequently found on Byzantine bronze crosses. Usually made of metal, polycandela were used both as household and church furnishings in the Early Christian era (from the 3rd to the 9th centuries). In the latter role they were typically suspended from the ceiling, and when in use, the light cast intricate shadows on the floor and walls. Often displayed in large groups, these fixtures created extravagant lighting effects that, combined with incense, gilded icons, and chanted hymns, generated a multi-sensory experience for Byzantine worshippers. The Menil’s polycandelon hangs from four chains attached by an inverted flower to a cross with flaring arms. The cross itself is attached by another short chain to a hollow metal bust of a child of African descent. The figure appears to be a Roman balsamarium, or perfume flask, dating from the 3rd century CE. This anachronistic insertion is an unusual detail in an object that otherwise conforms to traditional Byzantine styles.