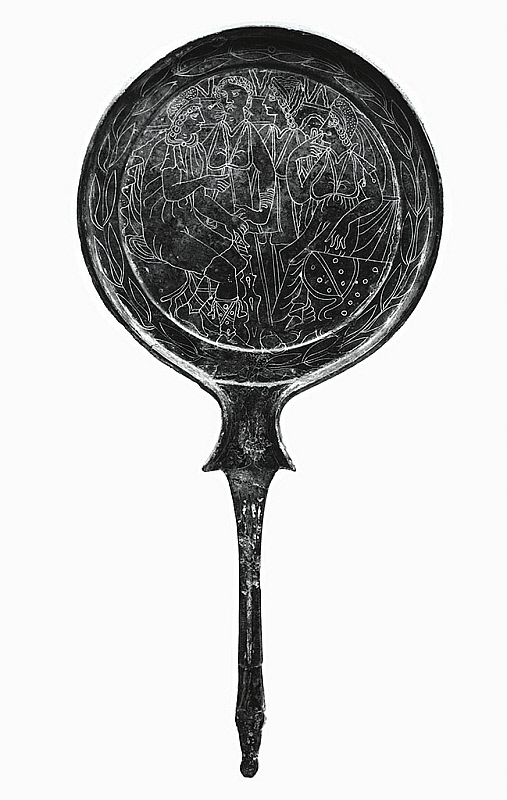 Dating to the 3rd century BCE, this Etruscan bronze mirror depicts the Judgment of Paris. The scene shows Paris (a figure also known as Elacsantre, in Etruscan, or Alexandros), wearing a tunic, tall boots, and a cap, seated on a rock in front of three women dressed in high-waisted gowns: the Etruscan goddess Uni (Hera) wearing earrings and a bracelet, Turan (Aphrodite) with a diadem and wings, and a seated Minerva (Athena) wearing a cap similar to that of Paris. An architectural façade of a temple can be seen behind the heads of the women.

This circular hand mirror has a vertical beveled edge. Notably, it was cast in one piece with the handle, which features a deer head at the end (also called its terminal). Placed within the so-called Spiky Garland Group of mirrors on account of the animal terminal and the decorative laurel-wreath border, the depicted image has close parallels with other pieces possibly produced in the same workshop. Greek mythological stories, with similar Etruscan figures, were a popular subject matter for these mirrors. Additionally, this workshop is known to have produced them with depictions of conversational groupings, often with four figures. Etruscan mirrors were not only fashionable wedding gifts for women, but they also could be dedicated at sanctuaries and were a component of mortuary assemblages associated with female burials.

The subject matter, although Greek in origin, is common in Etruscan art. Paris was a prince of Troy who figures largely in the mythic cycle about the Trojan War. In the Judgment of Paris, he must decide which of the three goddesses will be the winner of a golden apple that the goddess of discord had said was “for the fairest.” Each goddess offers the young Trojan prince a bribe: the most beautiful woman in the world, a vast empire, or superior wisdom and battle skills. In the Greek myth, Paris selects Aphrodite (Turan), with the lure of beauty, as the winner. Within Etruscan contexts, Paris is connected to concepts of love and marriage, even though, according to the myth, Paris whisks away the already married Helen of Sparta to Troy, which sparks the Trojan War. The emphasis on beauty in the imagery, including the subject matter as well as the portrayal of the goddesses, most likely connects with the object’s function relating to adornment and possibly as an allusion to the beauty of the mirror’s owner.