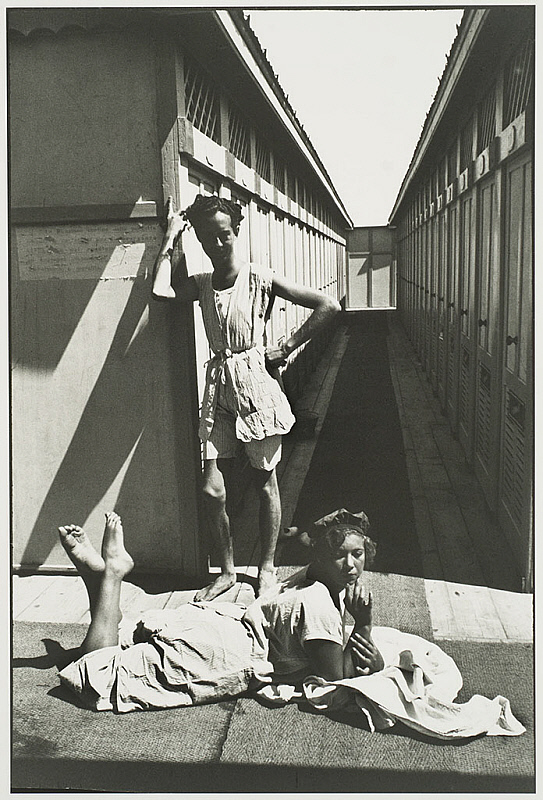 In 1933, artist Leonor Fini spent several weeks in her native Italy on a road trip with novelist André Pieyre de Mandiargues and photographer Henri Cartier-Bresson. This was a close-knit trio: Mandiargues, whose recent inheritance helped finance their travels, was childhood friends with Cartier-Bresson and lived with Fini above a toyshop on the Boulevard Saint-Germain in Paris. In this image, Mandiargues stands behind Fini as she strikes a leisurely pose, embodying the leonine and self-possessed sphinx character that would soon appear throughout her work. A painter, illustrator, theater designer, and writer, Fini developed an iconography centered on powerful, erotic women often attended by androgynous male figures, in a reversal of traditional gender roles. Although Cartier-Bresson later became famous for his photojournalistic approach to taking photographs “on the run,“ Fini loved to pose, believing that “nothing is more false than the ‘natural’ snapshot.” After this collaboration with Cartier-Bresson, Fini posed for numerous photographers, including Erwin Blumenfeld, Dora Maar, Lee Miller, and George Platt Lynes, revealing the depth of her interest in masquerade and performance. As she once said, “I have always loved—and lived—my own theater.”