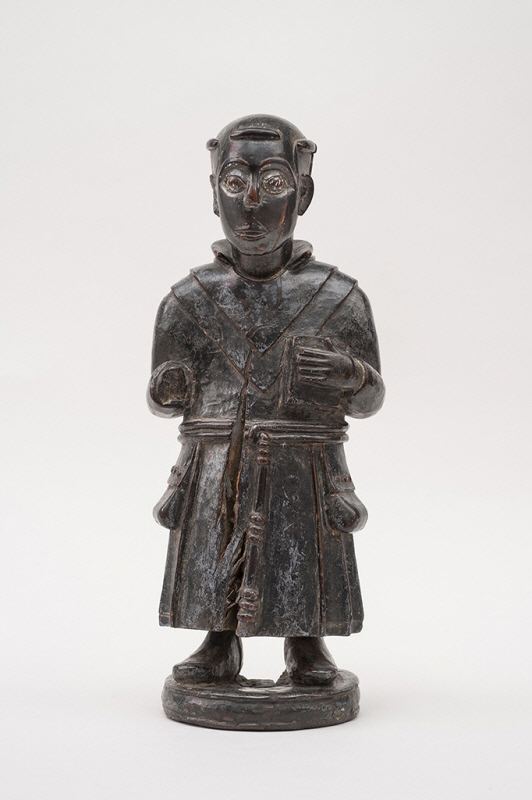 This statue of Toni Malau, or Saint Anthony, illustrates the powerful role Christianity has played in Central Africa since the early modern period. In the late 15th century, after the baptism of its king, the great Kingdom of Kongo officially became Christian and opened its doors to Catholic missionaries, images, narratives, and beliefs. From the 16th to the 18th century, a time of intense missionary activity in the region, the Kongo people received Christian ideas and icons and integrated them strategically into their artistic forms and religious thought. They used Christian images and concepts in the ritual objects they created to deal with the interrelated strains of rampant civil war, brutal social change, and the depredations of the Atlantic slave trade.

This wood statue is part of a large corpus of objects representing Toni Malau that were carved or molded by Kongo artists using details derived from European prototypes of the saint. Depicted in towering or minute wood carvings, in metal pendants or medals, the saint offered protection against disease and bad fortune. The medium-size Menil example wears the ample hooded habit, tonsure, and knotted string belt of the Franciscan order and carries in a book one hand, one of the attributes of Saint Anthony of Padua. Franciscan Capuchin priests, sent by the Vatican at the demand of the kings of Kongo, played a central role in the diffusion of Christianity in Central Africa, and the figure of the famous Franciscan Saint Anthony is ubiquitous in Kongo Christian imagery.

Drawing its form and power from both traditions, Toni Malau embodies the cross-fertilization between Christian and Kongo religious thought and imagery. Eyes wide open as a sign of his clairvoyance, with two full bags at his sides, he holds the tools to perform his office of healer and protector. Standing with one foot in front of the other, he is ready to bring his assistance to the worshiper. One look at this face, worn away by repeated rubbing, reveals the frequency with which his help was sought and faithfully expected.

Byzantine Things in the World
Arts of Africa